The fine folks at Fleshlight are always looking for new boundaries to push, and they have now entered the space race, with a pussy that lets you go where no man has gone before! 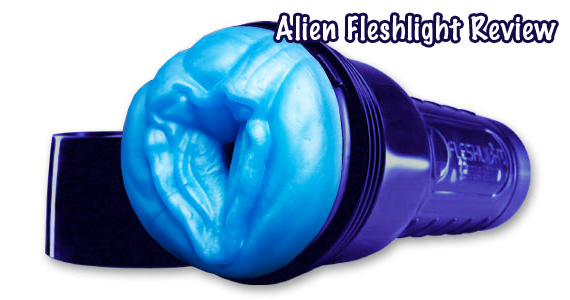 If you are a fan of Fleshlight Girls products, you already know that each of their toys is molded from casts of some of porn’s hottest, wettest and tightest pussies, arseholes and mouths. One should not assume that the Alien Fleshlight shares the same creative process, but if there is life out there, then rest assured it most likely has a pussy that feels like this!

With lips that are literally out of this world, the entrance to the Alien Fleshlight pussy is puffier and more prominent than their human counterparts. Coloured an eerily fluorescent blue, the Alien Fleshlight contains an inner passage that is unique from any other sleeve on the market. A series of closely placed beads of Super Skin (Fleshlight’s own patented material that is as close to feeling actual skin that you can find anywhere on Earth…or elsewhere for that matter) line the surface of the Alien Fleshlight, wrapping and squeezing your cock in a way that will have you emptying your balls in a way that you never have before.

Granted, when I saw the Alien Fleshlight the first time, I thought it would be an excellent gag gift, and perhaps it is that. Then I started thinking about all of the alien pussy that Captain Kirk got, and decided that he must be onto something.

Science Fiction Fucking – Trying it out

When my Alien Fleshlight arrived from Lovehoney, (discreetly packaged as always), I was hard pressed not to try it out immediately. I pushed my finger inside (it was tight enough to make wonder if my cock would fit…it did) and felt the difference from the other Fleshlights I have used. I was hard before my pants could hit the floor when I realized how the Alien was going to feel around my cock.

For a company that specializes in making you feel like you are fucking an actual real pussy, Fleshlight has more than succeeded in delivering on the illusion that you are fucking a real non-terrestrial cunt!

Using the Fleshlube Water lubricant, I prepared the Alien pussy for fucking.  I had also ordered Fleshlight’s shower mount, which allows for hands-free fucking. I placed the Alien in the shower mount and began to slide my cock inside, slowly as possible. It’s a good thing there was a wall for me to support myself against, because within a few seconds of entering the Alien pussy my knees weakened. My mind raced as I thought about every sexy female alien I’ve ever seen from television and the movies.

The Alien Fleshlight not only looks but also feels unlike any of their excellent products, but the Alien offers you the same quality and pleasure of the entire Fleshlight brand of toys.

The Super Skin material is durable and can withstand even the most vigorous fucking, time and time again. You can add to the lifetime of your Alien Fleshlight by using the Fleshwash after each fuck and periodically applying the Fleshlight Renewing Powder.

I still enjoy fucking my Fleshlight Girls, but for a nice change of scenery, the Alien Fleshlight is number one in my book!